El Chalten is located in the province of Santa Cruz, which is part of the southern region of Patagonia in Argentina. The easiest way to get here is to take a plane to Comandante Armando Tola International Airport and then travel 220 km by land to El Chalten. From the airport there are several transport options to reach El Chalten: bus companies, private transfers or car rentals. Click here to find more information about this: https://elchalten.com/v4/es/como-llegar-a-el-chalten.php . You may also check the discounts on car rentals and bus fares offered by El Chalten Travel. The routes which connect El Calafate and El Chalten are the iconic route 40 and provincial route 41. The latter was declared “Scenic Route” by the Chamber of Deputies of Santa Cruz Province in 2017. This is due to its panoramic views, which include mountains, lakes and the Viedma Glacier. During this trip you will certainly enjoy watching the native fauna, which mostly consists of birds and guanacos. This route borders the enormous Lake Viedma while crossing the steppe, which is perpendicular to the mountain range. Following the route, when approaching the mountains in the west, you will be able to catch sight of the glaciers and the granite peaks that belong to this part of The Andes. If you arrive on a clear day, you will be able to spot the Fitz Roy mountain range from some distance away. The setting is simply stunning.

What type of tourism do we offer?

El Chaltén is the best place for those who love outdoor activities and trekking. It is perfect for those looking to discover the breathtaking natural beauty of the area and enjoy the mountain treks. It is also a great option for those who do not wish to go on long hikes, since the tourist area is located in a valley at the foot of the mountains and the views there are extraordinary as well.

Which activities do not imply hiking?

There are all kinds of excursions and activities such as horseback riding, fishing, bicycle tours, guided visits to historical sites and trips by car or tourist buses.

The opening of shops, restaurants, travel agencies and the operation of daily shuttle services begin in October. We recommend wearing trekking shoes and dressing in layers since sudden weather changes are common. If you wish to go on treks and you do not want to deal with excess baggage, you can rent all kinds of gear here: trekking poles, shoes, crampons, snowshoes or rigid boots. The peak tourism season for Chalten is October to May. The busiest periods are January, February and Easter; so make sure you book 30-45 days in advance if you are planning to visit us during those months.

Are you traveling with kids?

If you are planning to come with a baby, do not forget to bring a baby carrier so that you can enjoy easy or moderate hikes as a family. If you have kids under 6, you can go on moderate treks with them, but make sure you respect their pace, you keep them hydrated and you never leave them alone. Older kids are usually able to make most treks and excursions, but if they are not used to hiking in the mountains, please see that they respect the national park safety rules.

Follow in Instagram to get more tips and information to make your visit to El Chalten unforgettable. 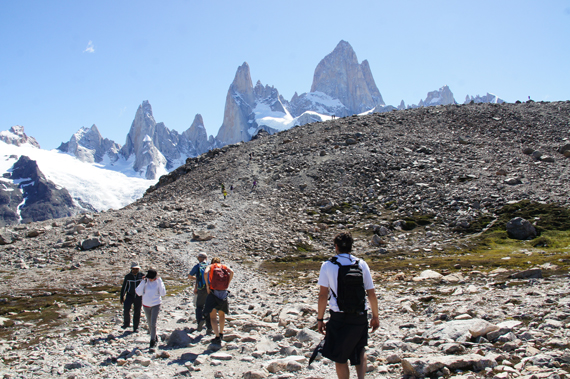